IN STRATFORD UPON AVON 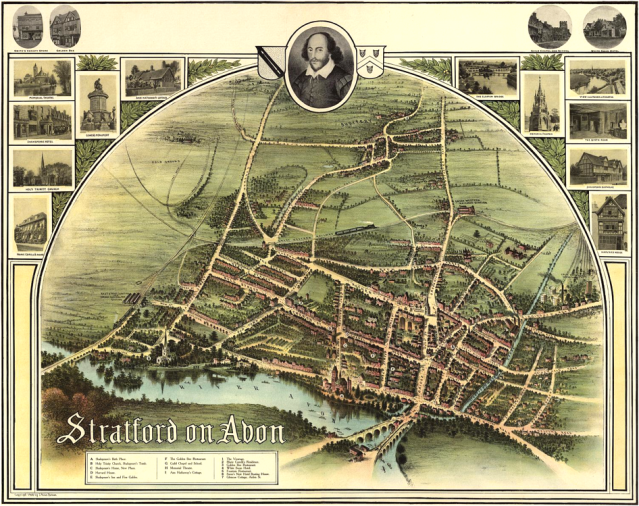 Inscape joins worldwide commemorations of the 400th anniversary of Shakespeare’s life with a very special ‘Inscape Retreat’* to Stratford-upon-Avon. In Shakespeare’s day Stratford was a thriving Tudor market town perched on the edge of the Cotswolds. In the 21c it is no less vibrant, especially in early summer with its calmly flowing river, bloom-filled Elizabethan gardens and patient ancient buildings as backdrop to a community imbued with civic and cultural pride. Altogether Stratford stands as an almost theatrically perfect setting for an in-depth Shakespeare experience.

We have chosen our base of operation with utmost care. The Arden Hotel sits on Waterside which would have been part of the busy river basin in Shakespeare’s day. The Hotel faces the Royal Shakespeare Company’s Swan Theatre; Shakespeare himself might very well have stood on this very spot in the seventeenth century. Shakespeare’s garden came all the way down what is now called Chapel Lane, a narrow road that separates The Arden from New Place. New Place was the home that Shakespeare built himself when he retired to Stratford in 1613. From there we will venture forth for private backstage, behind-the-scenes tours of the two theatres, a river cruise and dinner on board a classic river boat, a private dinner in Hall’s Croft, Shakespeare’s daughter Susanna’s house; a private tour of Shakespeare’s home, New Place, newly re-opened to the public; and short architectural/historical walks in Stratford itself. After a leisurely breakfast Nicholas Friend will present a richly illustrated lecture in preparation of the day’s theme.

We shall attend no fewer than three superb productions at the Royal Shakespeare Theatre and the Swan Theatre: the great and terrifying ‘Dr Faustus’ by Shakespeare’s passionate rival Christopher Marlowe, ‘The Alchemist’ Ben Jonson’s brilliant classically-structured comedy and ‘Hamlet’ Shakespeare’s monumental and ever-perplexing masterpiece. Ingeniously grouped together they enable us to set Hamlet in the context of previous Elizabethan notions of tragedy. The three plays between them examine matters of commerce, religion, the supernatural, personal conscience, love and philosophy, all issues of supreme concern to Jacobethans, themselves in the grip of the strong currents of the intellectual, cultural, religious and political issues of their day.

* Introduced in 2015, an Inscape ‘Retreat’ is a tour no less invigorating in content, but designed to be less physically demanding, that is, requiring much less, or no, bravado or stiff upper lip! We stay in the most comfortable, well-staffed and well-equipped hotel as our centre of operation. Chosen for the excellence of its kitchen we take most of our meals in the hotel dining room. We convene at 10:30 with coffee followed by Inscape’s signature multi-disciplinary, illustrated morning lecture. The afternoons will be peppered with gentle excursions after a leisurely lunch. A rest time is provided every afternoon before an excellent dinner either in the hotel or arranged elsewhere.

12.03 Arrive and meet Nicholas Friend for taxis to the Arden Hotel

2.00 Shakespeare Tribute in Music and Song arranged by The Lute Society

7.30 Dinner on the Countess of Evesham restaurant cruiser

11.00 Lecture by Nicholas Friend ‘Mockery and Mendacity in Shakespearean England’.

2.15 Behind the Scenes Tour RST and Swan

11.00 Lecture by Nicholas Friend ‘Tragic Notions in Drama from the Greeks to Elizabethan England’

5.00 ‘Setting The Scene’ Dinner and readings in Hall’s Croft

11.00 Lecture by Nicholas Friend ‘Comic Relief and the Common Man’

14:42 Depart on recommended train from Stratford-upon-Avon 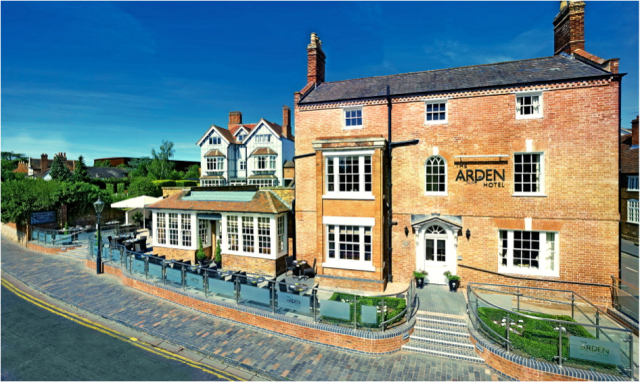 The Arden Hotel is located directly opposite a cobbled street from the theatres, beside the River Avon and close to the town centre. As the best and most convenient hotel in town many actors stay at the Arden and the walls are covered with photographs of past greats and modern actors. An elegant and sophisticated 45-bedroom boutique-style hotel. Its recent multi-million pound refurbishment brought attention to every detail. The rooms are light and spacious and beautifully appointed. All have sitting areas with flat-screen cable TVs and DVDs plus a library of films to borrow. There’s complimentary WiFi, coffeemakers, biscuits, minibars and a turn-down service. The lovely bathrooms are huge with large baths and double showers.

COST including accommodation: £1795 members, £1845 non-members, Single Room Supplement £160, deposit £250, including five nights’ accommodation in the Arden Hotel Stratford, all meals included: breakfast, private lunches in the Arden Hotel, hotel and event dinners with wine, including dinner on the Countess of Evesham riverboat and private dinner in Hall’s Croft the home of Susanna, Shakespeare’s daughter; a private tour with wine and canapes in Shakespeare’s Birthplace, private visit to New Place, Shakespeare’s home; theatre tickets to Dr Faustus, Hamlet and The Alchemist in the Royal Shakespeare and Swan Theatres, all tuition, transport to and from Stratford station, VAT and service.

Cost excluding accommodation: £1255 members, £1285 non-members without accommodation and breakfasts, but with all lunches and dinners and full programme as indicated above. Both costs exclude travel to and from Stratford.